The Selby Ave JazzFest began as a vision of Golden Thyme Coffee Cafe owner and Selby community activist Mychael Wright back in the early months of 2002.

“I didn’t have a grand opening celebration for Golden Thyme,” stated Mychael. “I also wanted to see how the community would react to a yearly music fest-type of event.”

“The first anniversary of 9/11 was coming up and you could just tell that people were feeling pretty somber,” he added. “I then thought to myself, ‘I’m tired of feeling this way. We need to celebrate the good things that are going on in this world…especially here on Selby.’ Nothing gets people together like a good old-fashioned block party, so we took it from there.”

The inaugural Selby Ave JazzFest took place on Milton Avenue between Dayton and Selby Avenues. A small, but enthusiastic crowd of 600 people enjoyed an afternoon of great local jazz, food…and a much-needed dose of community healing.

“The morning started out rainy and kind of cold. I looked at my wife Stephanie and wondered what the heck we were going to do if the weather stays this way,” recalled Mychael. “Around noon, the sky opened up and beautiful sunshine shown through.”

He then added, “It turned out to be a perfect fall day which was great because I think most folks were tired of feeling down about the events of the past year.” “With COVID restrictions lightening up, people were ready to get out and be of a community,” stated Mychael. “The weather, vendors and especially the performers were geared up and ready to go. Many hadn’t  All did not disappoint. In addition, the event’s vibe was so positive and engaging. I had a number of folks tell me this was the best Fest ever!” “We had a decision to make–cancel the 2020 Fest or present a virtual line-up,” said Mychael. “To be honest, we were leaning towards cancelling; however, the community overwhelmingly supported a virtual event. We’re glad we did for all performers were spot on; plus, a virtual Fest provided all of our artists with a performance venue. In addition, it was really great to see Nachito really get after things after surviving a bad bout of COVID 19 earlier in the year.” “I tell you people came early and stayed late this year,” stated Mychael. “We usually don’t start to notice if we’re getting a larger crowd until 5:00 or so. This year, things were busy at 3:00!

The weather had a lot to do with attendance for it was the 6th Fest in a row with beautiful conditions.

“All performers played tight sets; however, this is the year where the ladies really shined,” added Mychael. “Patty Lacy put together a wonderful band that featured an amazing set of back-up singers. And headliner Goapele…well what can I say? She was magnificent. People are still talking about her performance.” Another top-notch day was again provided by the weatherman…high 60’s and not a cloud in the sky. “This year’s lineup featured an interesting mix of everything, which was pretty cool,” explained Mychael. “On one hand, we had a number of young performers grace the stage including students from Walker West and a really great set from Elaina McRath who really got people talking to a beyond smoking performance from Cuban-born pianist Nachito Herrara. It was quite the day!”

“Overall, from the time the grounds opened until the sunset, this was perhaps our best top to bottom music lineup,” stated Mychael. “This was the first time that I can remember that people would not leave at 8 AM,” added Mychael. “I was like ‘OK, it’s 8 PM. Time to go.’ and people still wanted more.” 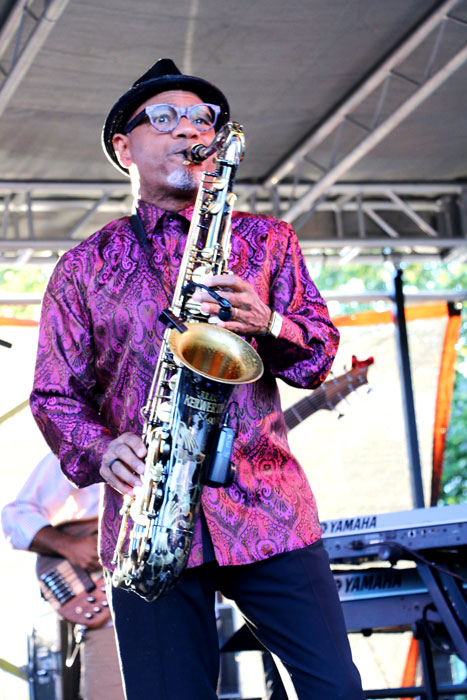 Mychael pulled out all the stops in celebration of the Fest’s fifteenth anniversary by presenting Grammy Award Winner saxophonist Kirk Whalum. “What a show! What a day!,” stated Mychael in regards to Mr. Whalum’s performance. “When he performed Whitney Houston’s “I Will Always Love You” in the crowd…what a moment!” JF15 also featured the reunion of famed pianist Anthony Walker and his father, Walker West founder Reverend Carl Walker. “That was a special moment, especially for the elders who have called Selby home for most of their lives,” added Mychael. 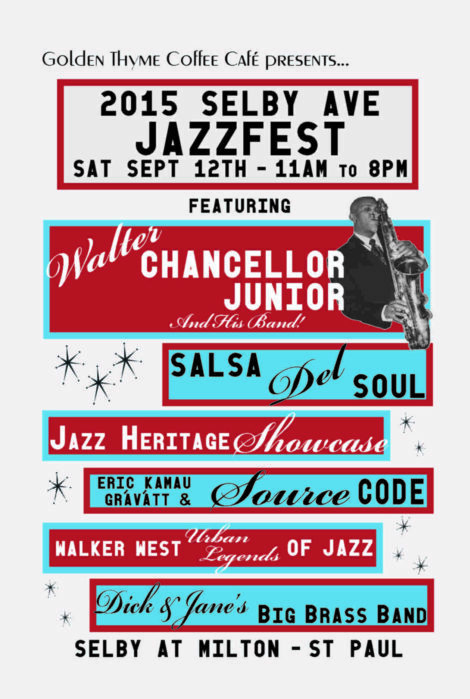 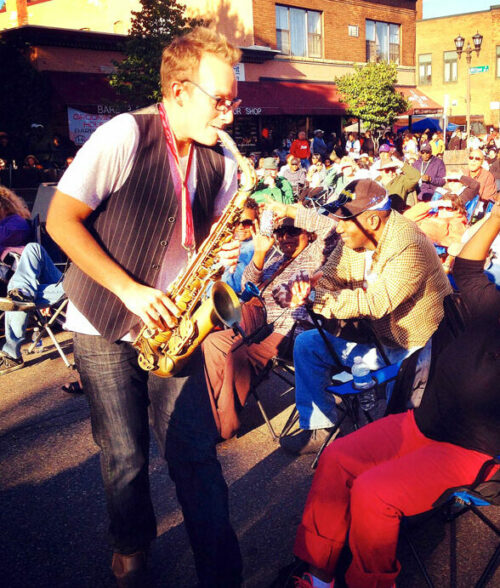 The weather gods smiled on the nearly 10,000 folks in attendance. Multi-Grammy nominee and drummer extraordinaire Harvey Mason performed to an enthusiastic and appreciative audience. 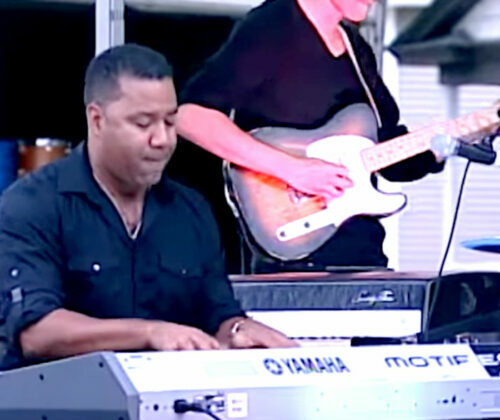 Mother Nature turned things a bit moist for a short time, the second Fest to witness a little rain. “At 4:30, the place was packed; as packed as I’ve ever seen it,” declared Mychael. “Then at 5:00, it began raining and really came down until about 6:30 or so. It slowed down just in time for headliner keyboardist Marcus Johnson. I really appreciated the folks who stayed around until the end.” 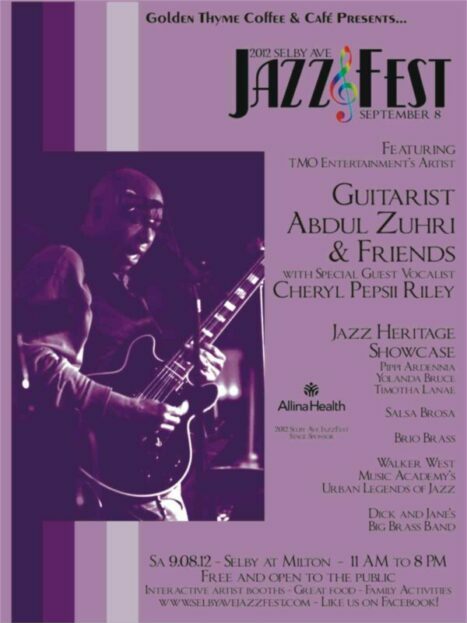 An estimated 8,500 folks got together on another glorious day that featured a clear sky and temps in the high 70’s. NYC-based jazz guitarist Abdul Zuhri and his band along with jazz/r&b vocalist Cheryl Pepsii-Riley served as headliners. 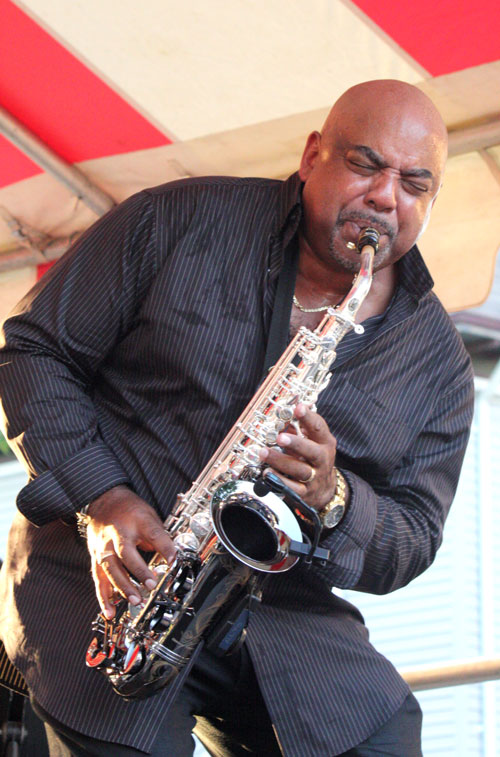 JazzFest’s 10th anniversary! Headliner smooth jazz saxophonist and Grammy nominee Gerald Albright, who put on a smoking hour and a half set that had the crowd clamoring for more. “Gerald is a pro, no doubt about it,” stated Mychael. “He loved the feel of the festival, likening it to one large block party.” 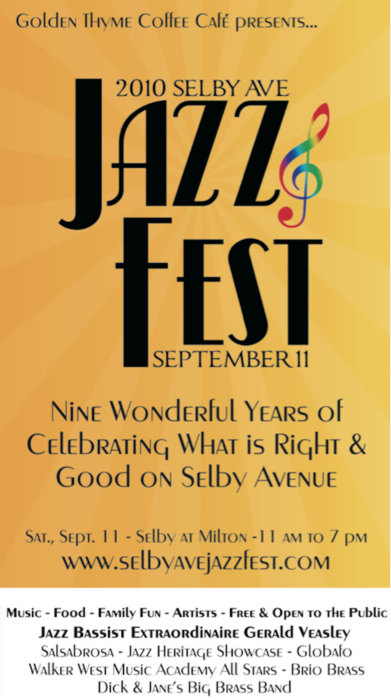 One word could be used to describe the 2010 JazzFest. Perfect! With temps in the low 70’s and the sun shining the entire day, the stage was set for the most successful JazzFest to date. “Seriously, could you ask for a better day?” pondered Mychael. Attendees caught the fine weather’s vibe and all performing artists provided solid sets. An estimated 10,000 people visited the intersection of Selby and Milton to take in the day’s anniversary festivities.

“One thing that stood out for me in terms of our entertainment line-up was the return of the Jazz Heritage Showcase, a collection of Penumbra Theater and Twin City jazz scene regulars that bring back all of the old classics,” stated Mychael. “It was time to get back to discovering the roots of American jazz and boy did they pull it off.”

Headlining the JF10 was jazz bassist extraordinaire Gerald Veasley. “He fired it up!” said Mychael on Veasley’s performance. “His band was tight and he was spot on. What a great way to end one of our
largest Fests to date.” 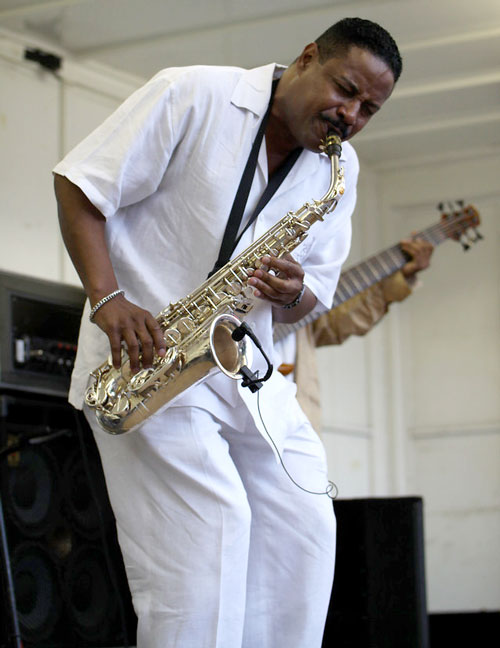 Stated The Twin Cities Daily Planet about the 2009 Fest, “From all walks of life—some in business, some in the arts, some in education—folk get to congregate, network, and just in general be about a community.”

Over 12,000 people listened, ate, danced and interacted on what could be best described as a perfect fall day. Headliner smooth jazz saxophonist Kim Waters put on a blistering show two-hour set. Over 150 performing artists were featured on the JF09 stage. 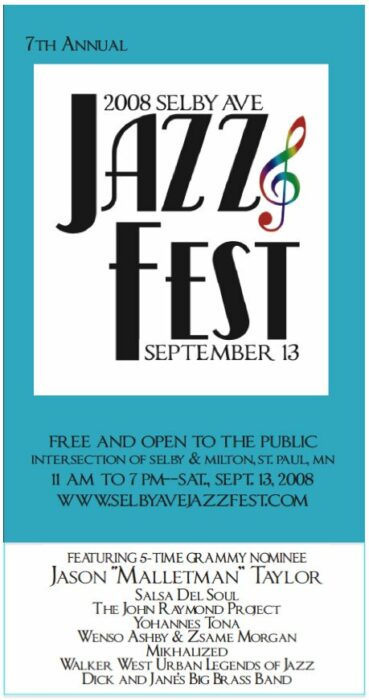 Simply put, it poured. “I think it was our first real rainstorm in something like eighteen days,” said Mychael. “We started setting up early in the morning when it started. The rain continued until around 4:30 PM when Jason ‘Malletman’ Taylor hit the stage. The clouds left, the sun came out and he went on doing his thing as only he can do.”

JF07 attracted the largest crowd to date with an estimated 9,500 people attending the event over the course of eight hours. “It was beautiful,” Mychael said of the gathering. A globally diverse mix of music was featured, including the Latin sounds of Salsa del Sol, West African rhythms of SUNplug’d w/ KenWanaku and Caribbean stylings of Irie Sol & Angelo Williamson. The Fest also marked the inaugural year for the Leigh Kamman Award; an honor given to the individual who has contributed to the Twin City’s jazz scene at the grassroots level over the course of their lifetime. Award namesake Leigh Kamman was rightfully awarded the honor for his decades of broadcasting excellence. 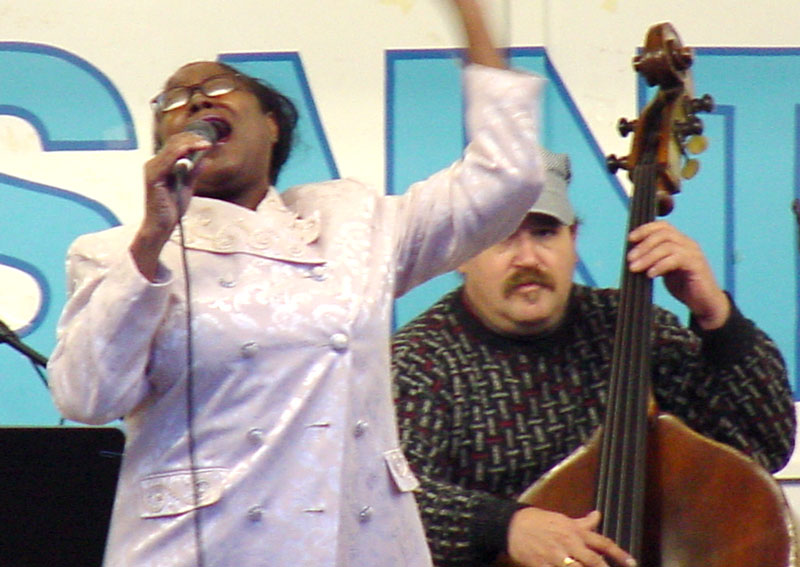 For as hot as the ‘05 Fest was, 2006 was just the opposite in the temperature department. “I think a few flakes flew while we were setting things up that morning,” stated Mychael. A crowd of 5,500 braved the “low-50s when the headliner took the stage” performer sets, including the Fest’s first-ever open-stage jam. 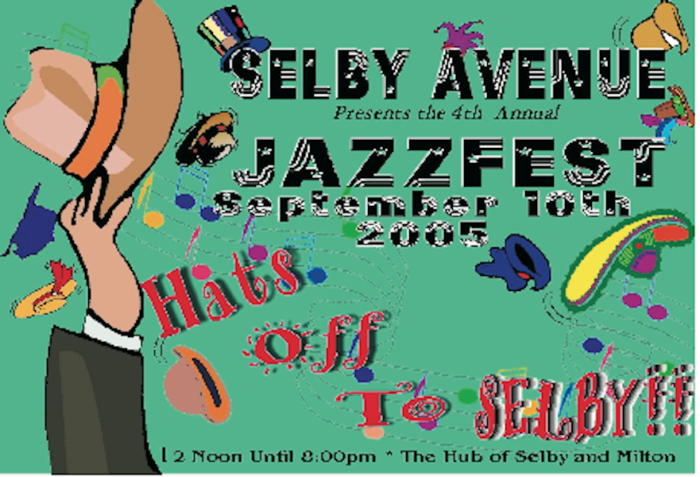 6,500 people took in a sun-soaked day of great music on what one of the hottest days in the Fest’s history. “It was unseasonably hot. Most folks were perched up next to the building on the south side of Selby and Milton; all trying to grab what little available shade there was,” said Mychael. Headliner Patty Lacy wowed the crowd with a full set of Gospel-influenced jazz originals. The event also featured the second Jazz Heritage Showcase, which included Debby Duncan, Geoff Jones, Thomasina Petrus, Greg Sears and Regina Marie Williams, who put on a dazzling tribute to iconic jazz duos. 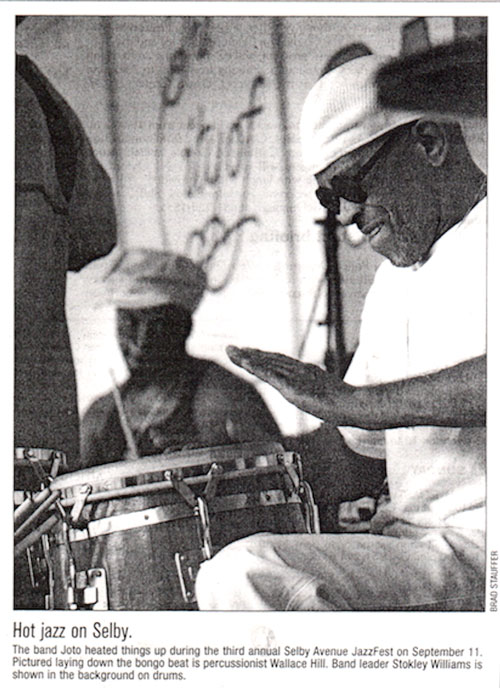 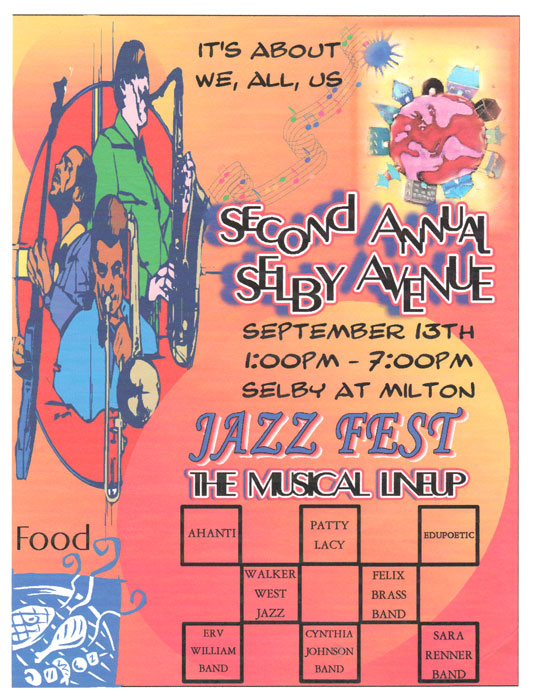